In the Victorian Era, stockings (a.k.a. hose) for men, women, and children were knitted but did not have the elastic ability to remain in place like socks do today. Without use of a garters or hose supporters, stockings would fall immediately.

This following listing, from the Montgomery Ward & Co. Spring and Summer Catalog of 1895 shows Misses’ and Children’s Lisle Thread Hose, available in different sizes and in two colors:

I find it amusing that certain era-appropriate bits of Victorian American clothing find its way into fiction. But hose supporters are the invisible piece of essential clothing that I’ve yet to read about in fiction–they must be most unromantic. And look a bit dorky, don’t they?

Gentlemen’s [sic] Royal Garter stocking supporter, advertised in the September 1878 Catalogue of Novelties and Specialties in Women’s and Children’s Underwear.

Men’s hose supporters for sale in the 1895 Montgomery Ward Spring and Summer Catalog.

In both the Montgomery, Ward & Co. Catalogue and the Sears, Roebuck & Co. Catalogue, garters and hose supporters seem to be synonymous (1895 to 1897 and likely beyond). Made of silk (or elastic webbing), and affixed with a clip to affix to the sock edge, men’s garters were adjustable to fit comfortably despite the circumference of the man’s leg (just below the knee), came in black, white, or various colors. At 10Â¢, 18Â¢, 25Â¢, or 35Â¢, the daily-wear implements were always hidden beneath trouser legs, but were an apparently essential part of a man’s wardrobe.

Warren’s Patent Stocking Supporters advertised in the 1878 September Catalogue of Novelties and Specialties in Women’s and Children’s Underwear.

Pullbacks, manufactured by the Warren Hose Supporter Co. of Boston Mass, advertised in the 1878 September Catalogue of Novelties and Specialties in Women’s and Children’s Underwear.

The above item listing, No 10931 from the Montgomery Ward & Co. Catalog, Spring and Summer of 1895, offers a Black or White Sateen Combination Belt, with hose supporters (the long straps with clips at the bottom–fall along the outside of the thighs; this is a side view) and points for safety belt (feminine hygiene). Price 25Â¢.

This listing includes item No. 109832, Ladies Suspenders for supporting skirt. Such suspenders were worn beneath the clothing to hold the skirt up and distribute the weight of the heavy garment to the shoulders rather than to have it sag about the waist. Price 10Â¢.

The Button Clasp Hose Supporters, for sale in the Sears Roebuck & Co. Catalogue (no. 104), Spring and Summer of 1897, also lists similar supporters for babies, children, misses, young ladies, and ladies. Note the warning to avoid using ordinary elastic as a garter (circle to encompass the leg), and instead insisting this belt to support the hose at the knee is best. Ladies’ Belts with hose supporters = 18Â¢.

Ladies Clasp Supporters for Stockings for sale in 1895 Montgomery Ward & Co. Catalogue. Note some supporters are combined with shoulder braces.

This 1897 item listing specifies either elastic or silk, with proper adornment, ranging in price from 13Â¢ to 25Â¢ a pair, depending on material. Garters were worn over the upper sock, with the stocking edge extending beyond the garter, literally to hold it up in lieu of today’s elastic edging. The stocking wasn’t clipped to the garter, nor were supporters (with clips/buttons) required. Perhaps garters were more effective and perhaps they were not.

The “Onesie” of Victorian America 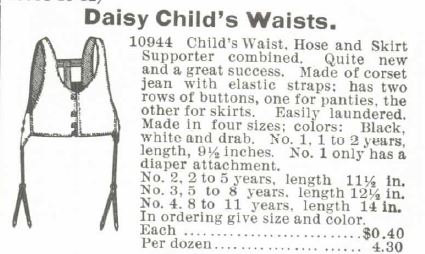 A little pricey, given the quantity a young child would go through in a day or between laundry days–but note the clever advertising. “Quite new and a great success.” Choosy mothers must ensure their children had adequate undergarments, the newest in holding up diapers or panties and keeping skirts in place. I can’t imagine the chore of dressing and changing young ones in the late Victorian era.

Or perhaps I can.

Once again, feeling rather lucky to have been born in the 20th century and my own babies born 100 years beyond these Sears and Montgomery Ward catalog offerings.