After my feature article about tobacco use in the 19th century, it’s good timing to share Victorian-American Tobacco Advertisements.

The following Victorian-American Tobacco Advertisements are presented in order of publication, oldest to newest. Citations are included in each image subtitle, and include vintage newspapers, publications (books), and catalogs.

Premium Havana and Cuba Cigars manufactured by Messers. Lord, Wood & Co. of Elyria, O. being the same which took the premium at the last Ohio State Fair. Finest Varieties and Qualities of Cuba Tobacco. Advertised in The Summit County Beacon of Akron, Ohio. February 9, 1860. 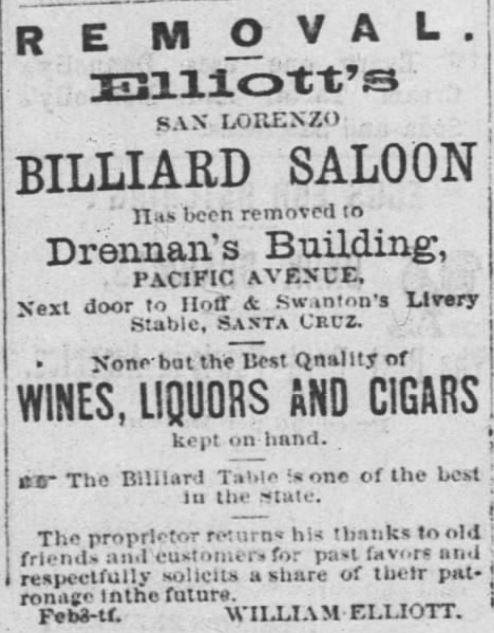 Elliott’s Billiard Saloon has been removed to Drennan’s Building on Pacific Avenue–None but the best quality of wines, liquors and cigars kept on hand. “The proprietor returns his thanks to old friends and customers for past favors and respectfully solicits a share of their patronage in the future.” Advertised in Santa Cruz Weekly Sentinel of Santa Cruz, California. March 30, 1872.

Smoke only the choicest CIGARS, and for these the “Monogram” and “Golden Eagle” brands are unsurpassed, not only in quality but in price. The “perfection “Smoking Tobacco, for Cigarettes, will also be found a superb article. B. Estabrook & Co., 224 Washington street.

“Jackson’s Best Sweet Navy Chewing Tobacco! was awarded the highest prize at Centennial Exposition for the fine chewing qualities, the excellence and lasting character of its sweetening and flavoring. If you want the best tobacco ever made ask your grocers for this, and see that each plug bears our blue strip trade mark with the words Jackson’s Best on it. Sold wholesale by all jobbers. Send for sample to C.A. Jackson & Co., Manufacturers, Petersburg, Va.” Note the second and separate (and somewhat hard to read) Durham’s Smoking Tobacco beneath Jackson’s Best. A Victorian-American Tobacco Advertisement from Green Bay Advocate of Green Bay, Wisconsin. December 22, 1877.

John B. Sweeny, manufacturer of choice cigars and dealer in fine smoking and chewing tobaccos. Advertisement in The Herald and Torch of Hagerstown, Maryland. December 26, 1877.

Three Cigar and Tobacco Factories named and advertised in The Oakland Tribune of Oakland, California. June 19, 1883. Notice the statement of “white labor only.”

Peter “Peter Gretto, is the Leading Wholesale House for cigars, Pipes, and Smokers Articles, In the West. My Monogram, Sunflower, Dollies, Brunette, Ventrance and Our Bob are the best five cent cigars ever offered to the trade. Send your order for any price Cigar you want, if you are not acquainted with my brands. I will will ship and allow you to examine the goods; if not satisfactory they can be returned at my expense. Soliciting the patronage of the trade, I am, Very Truly, Peter Getto, Wichita, Kansas.” From The Wichita Daily Eagle of Wichita, Kansas. January 1, 1886.

Smoke S.W. Henry’s Panhandle Cigar 5 cents. Sold from Denver to the Gulf. From Fort Worth Daily Gazette of Fort Worth, Texas. February 24, 1889.

“It’s Out of Sight– Climax Plug. Put a little of it out of sight yourself, and see how good it is. Lorillard’s.” Note the illustration with a “plug-in-cheek.” From Marshall County News of Marysville, Kansas. February 15, 1895.

“Chew Climax. The favorite Plug Tobacco. It’s Lorillard’s the name of the maker is enough.” (or is it Clorillard’s?) From The Nebraska State Journal of Lincoln, Nebraska. June 11, 1895.

Header of Cigars Section, Part 1, of the Sears Catalog, 1898. See reference to “the war in Cuba.”

Part 2 of Cigar Section Header of the Sears Catalog, 1898.

Stogies and Cheroots offered for sale in the 1898 Sears Catalogue.

Imported Havana tobacco is rare, but these advertised brands (Sears Catalog, 1898) claim to be the real deal.

Finecut Chewing Tobacco sold in Pails, 10 lbs. each with “our own brands” listed in Sears Catalog, 1898, including: S.R. & Co., Seneca, Sereamer, light or dark, AA Dark, No 10 Dark, X Ray, Stampede, Tornado, Crown of Delight, Plum, Oriental (all light or dark, as desired)

“Smoking Tobacco” for sale by Sears Catalog, 1898, includes many different options sold by weight in tins, boxes, pails, foil cartons, etc. Most are for pipes and many offer a free pipe with several pounds purchased.

Notice the sheer quantity of Smoking Tobacco options, listed in section immediately above. In contrast, see how few cigarette options are offered in 1898 Victorian-American Tobacco Advertisements. This illustrates the relative “not so popular” status of cigarettes.

Cremo, the best 5 cent cigar. Advertised in The Topeka Daily Capital of Topeka, Kansas. Friday May 30, 1902.

Deseret Tobacco, advertised as “every puff a comfort. For your business smoke. For your after-dinner smoke. The highest grade of tobacco and Utah’s best skilled labor.” A. Bernstein, Maker. Advertised in Salt Lake Telegram of Salt Lake City, Utah. February 27, 1904.

Resources to further enrich your understanding of Victorian-American Tobacco Advertisements. Note: “Consumers Guide” is a paperback replica of Sears Catalog no. 107, published 1898.