Many historical recipes, along with many modern, contemporary recipes, instruct bakers to sift the flour prior to measuring (or sometimes, after measuring).

Puff Paste Recipes (two), published in The Nebraska State Journal of Lincoln, Nebraska, on June 11, 1895. Both recipes instruct the cook to sift the flour prior to measuring (“three cupfuls sifted flour”).

Etching of a flour sieve, pictured (below), from within the introductory pages of Royal Baker Pastry Cook (1888), shows a cut-away illustration of a crank handle that moves attached blades to brush flour over the sieve (fine wire mesh), to drop through to the bowl or plate below. The cutaway illustration indicates room for flour to be added to the pail, so a few cups could be passed through the sieve in one go.

“The Hunter and the Hunter’s Improved Flour Sifter, now used almost entirely in place of the common in or wood rim Sieve.” Advertised in Fort Scott Daily Monitor of Fort Scott, Kansas, on March 5, 1885.

Patent Barler Flour Sifter, sold for 19 cents (operated with one hand). Advertised in the Chicago Tribune of Chicago, Illinois, on April 19, 1887. 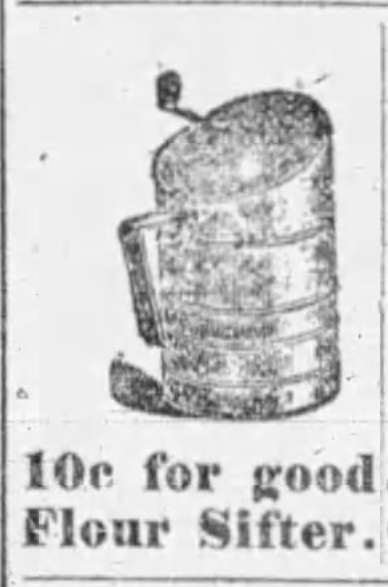 “Metallic Sieves” with tinned rims and “Annealed Wire Bottom”. Note the two similar “Flour Sifters” are the same design as today’s. For sale in the 1895 Montgomery Ward Spring and Summer Catalogue.

Sieve and Sifters for sale in the 1897 Sears Catalog. The traditional shape of the sifter is so it “also serves as a scoop”.

“Flour Bin and Sieve”, two options, sold as convenient methods of keeping flour free from moisture, dust, dirt, and vermin. Made of japanned tin (or otherwise handsomely finished), a built-in sieve allows the baker to pull a rod or turn a crank, and sifted flour is ready in the movable pan (or drawer) beneath. Published in the 1895 Montgomery Ward Spring and Summer Catalog.

“Cream City Flour Bin and Sifter”, made of japanned tin. Turn an iron crank to channel stored flour through the annular tin sleeve below the bin. See price comparisons. Published in the 1897 Sears Catalog No. 104.

But were sifters an American invention?

“As one of America’s manufacturing pioneers, the company (Jacob Bromwell) patents the world’s first flour sifter.”

Just two months later, a patent was awarded to E.L. Pratt of Boston, Massachusetts for a sieve holder.

Isn’t it interesting that most cooks have both a sieve (usually rounded, and on a handle much like a sauce pan) and a flour sifter that looks just like those developed mid-nineteenth century?

Do you have either implement in your kitchen?

Please forward or otherwise share this article with someone who might enjoy this glimpse of Victorian American history. Thank you!