Victorians were far from the first to “invent” indoor plumbing. The world has a varied and interesting history of toilets.

The ancient Romans had toilets.

Wealthy people in the Middle Ages had toilets.

The garderobe at Peveril Castle, Derbyshire, England. The chute visible at the lower-center of image allows waste to fall outside the castle (in the moat or pit and away from the bedchambers). [Image: Public Domain, courtesy of Wikipedia]

The Queen had a toilet.

So did Queen Elizabeth I at Richmond Palace, circa 1600. Her flushable toilet was installed by her godson, inventor Sir John Harington.

The Lady Elizabeth in about 1546, by an unknown artist (When Elizabeth I was a Princess) [Image: Public Domain, courtesy of Wikipedia]

So did lots of other people.

1775: Alexander Cummings, a watchmaker, developed the S-shaped pipe under the toilet basin to keep out the foul odours [sic].

1829: The Tremont Hotel in Boston was the first of its kind to provide eight water closets for guest use.

Tremont House at Tremont and Beacon Streets circa 1860 to 1890. This fine hotel was the first recognized as providing indoor plumbing facilities. Image: Courtesy of the Bostonian Society.

1833: the White House was plumbed (on the ground floor) with running water.

Etching of the White House, Dec 8, 1833. Image: Library of Congress via McClatchy DC

1840‘s: the finest of American homes had indoor plumbing (including flushing toilets), running hot and cold water, and all the conveniences such as bathtubs.

~ Lest We Forget, a Short History of Housing in the United States, Abstract, page 2

Note: the conjunction ‘and’ betwixt electricity and indoor plumbing implies that in 1920 the houses had to have both to qualify for that 1%. Feel free to read the document and let me know if you gather different information.

I toured the Flavel House in Astoria, Oregon (see this post too), and found the original decor of the bathroom facilities fascinating. On both the first and second stories, the toilets are built into a decorative wooden cabinet, much as the bathtub is, below. A lid shut over the bowl and seat of the toilet. (Much like we have today, but it covered the entire cabinet that extended well beyond today’s oval rims). The seat was finished wood, as was the lid. A toilet paper dispenser (if memory serves) was also in a bowl-like depression beneath the over-encompassing lid. When closed, the toilet appeared much like a wooden cabinet (see left-hand side of second image, below. A pair of white signs stand behind toilet lid). Two images, below, are different views of the same upstairs bathroom in the Flavel House. [built 1884-1885]

The Captain George Flavel House in Astoria, Oregon, is a fine example of a restored Victorian Queen Anne house. Image shows the full bath upstairs. A half-bath is original to the main floor. 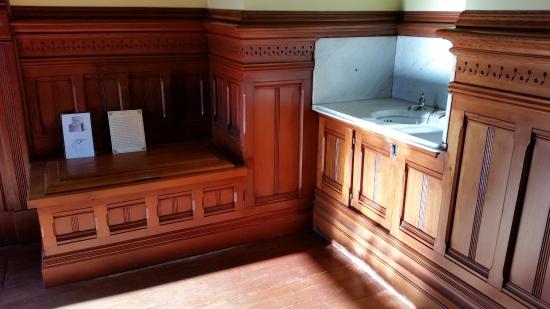 This photo of Flavel House Museum is courtesy of TripAdvisor

The Molly Brown House, built 1889 (Denver), “contained all the modern technology of the day including electricity, indoor plumbing, steam heat and telephone lines“.

Near the end of the following article about a new hotel in New York City, see the references to proper plumbing techniques. I’ve transcribed the ‘paragraph’ I’d like you to see, below.

Fireproof hotel has bathing tubs and pipes to waste-pipes to sewer. The New York Times of New York, New York, on May 30th, 1875.

Transcription of the last segment of this article regarding plumbing of the Buckingham Hotel:

“…The plumbing arrangements have been very carefully considered and thoroughly executed, and everything connected with them is of the most complete description. All waste-pipes are double-trapped so as to prevent the possibility of odors arising from the sewer. There are more bathing tubs in this house than in any other of the same-size in the world, and every part has all the conveniences in modern plumbing that can possibly be devised in a hotel.”

I purchased historical floor plans to reference when writing LESSIE: BRIDE OF UTAH (The American Mail-Order Brides Series). Architectural renderings illustrated an upper-middle-class family home with two bathrooms. A full bath on the main level and a half-bath on the second floor.

As Lessie’s circumstances in her youth had not been comfortable. She’d never had the luxury of an indoor bathroom. All water had to be carried inside and heated upon the stove. The thought of a daily full bath unimaginable! I made sure she had the chance to savor a hot bath in her new home. The scene did double- or triple-duty as her husband becomes acquainted with his mail-order bride.

Second floor of “Lessie’s House” floor plan. Note the “lavatory” (half-bath in today’s vernacular) on the back right-hand corner of the house, overlooking the sloped roof below.

Tip: to my fellow writers— This floor plan aided me extensively when writing Lessie’s story. Particularly in the scenes where Richard Cannon shows his new wife the home he had built for her, and the scenes that occurred inside the house. I had the distinct pleasure of beta readers telling me they could easily “see” the house. No confusion in the author, no confusion in the reader.

In Lessie’s twin’s book (JOSIE: BRIDE OF NEW MEXICO), I enjoyed writing luxury railway travel. The newlyweds enjoyed a private rail car equipped with not one private bathroom (for the family) but two (for the help).

Bathroom in private rail car, circa 1890. On the right-hand side of the image, a doorway is open into the chamber beyond. Note the plumbed sink (and radiant heat water pipes below). [Image: Pinterest]

What are your thoughts about indoor plumbing in the Victorian Era? Any tidbits to add?