Thanksgiving was well established in the United States by the times most of us think of as “Old West”. Pioneers. Gold miners. Mail-order brides. Settlers. Land-rushers. Silver miners. Railroad workers. Everyone would’ve brought traditions from countries of origin. And from the melting pot of New England where Thanksgiving feasts had been occurring for 200 years.

Over the River and Through the Wood

Originally a poem (by Lydia Maria Child) published in Flowers for Children, this best-known Thanksgiving song (confused as a Christmas song) is also known as The New-England Boy’s Song about Thanksgiving Day. Though most people today sing “grandmother’s house we go”, the original edition shows Lydia Maria Child wrote “grandfather’s house.” The tune’s writer is unknown.

The original poetry contained twelve stanzas. Most of us know only four.

Some speculate the song gravitated toward Christmas because abundant snow (enough for the horses to pull a sleigh through) by late November is rare everywhere but the northern states. When this poem was penned in 1844, New England was living through a colder era known as the Little Ice Age. Hence in Ms. Child’s Massachusetts experience she would have known ample Thanksgiving snows.

I’m fascinated to learn that the same author of this well-known song authored an 1829 recipe (or “receipts”) book entitled “The American Frugal Housewife“.

Company around the Thanksgiving Table

The pairing is inseparable today. But what about during the Victorian era?

You may be surprised to learn the earliest high school football rivalries took root in the late 19th century in Massachusetts, stemming from games played on Thanksgiving. Professional football began as a Thanksgiving staple during the sport’s genesis in the 1890‘s. The tradition of Thanksgiving football both at the high school and professional level continues today.

…besides football. And feasting. Or seconds on pumpkin pie.

According to the vast quantity of surviving images of documentation (advertisements, invitations, tickets) available online, it’s apparent New Englanders had no shortage of entertainment at Thanksgiving. I imagine celebrations on western homesteads and ranches were simpler, more humble. And perhaps more focused on family and gratitude and preparation for winter all squared away.

Victorians Give Thanks to God

Throughout the 1600s and 1700s, decrees of thanksgiving days frequently occurred. Reasons included the cessation of drought or bountiful harvest. Warm weather or military victory. And were days of prayer and focusing gratitude to God. Several early North American colonies set aside a day of thanksgiving for a good harvest or arriving safely on terra firma.

Thomas Jefferson skipped over this tradition, but James Madison renewed the concept in 1814. Why? Partly due to resolutions of Congress. And partly in acknowledgement of the resolution of the War of 1812. Madison twice in 1815 declared national days of Thanksgiving but neither was in autumn.

In the early- to mid-19th century, local governmental proclamations of specific non-Sabbath days of Thanksgiving (typically Thursdays) were commonplace in the young United States.

The tradition of proclamations issued on Thanksgiving Day continued. Often by individual states’ governors and seldom coinciding with one another.

President Lincoln proclaimed in 1863 that Thanksgiving would be celebrated nationally, collectively on the last Thursday of November.

Washington tried the same thing. But the idea of one national day of celebration apparently didn’t stick the first time around. AND it was thought vulgar to advertise for the Christmas shopping season prior to Thanksgiving’s conclusion. Hence the movement by FDR to place Thanksgiving squarely on the fourth Thursday of November, to expand the Christmas retail season and hopefully spur the economy.

Some things have changed. Some haven’t. 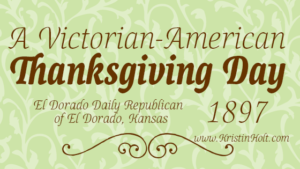